Before we had Elsie, we had a pretty healthy social life but after 10+ years of partying, we thought our disco days were sadly behind us when we became parents last year. That was until I discovered Big Fish Little Fish’s Family Raves – 2hr family-focused gatherings where you can go raving with your kids!

I first heard about Big Fish, Little Fish on facebook a few months ago, when a friend of a friend was raving (excuse the pun) about an event in Manchester that they had taken their dance music-crazy five year old along to.  I quickly followed BFLF on Instagram and regularly checked their website hoping for an event closer to us in South Wales.

A few weeks ago, we were lucky enough to be invited to go along to the recent BFLF Cymru’s Heroes & Villains Family Rave which was held at the super cool, new Tramshed venue in Cardiff.

To be honest, as much as we were looking forward to it, we didn’t really know what to expect from a ‘Family Rave’ at 3pm on a Sunday afternoon but as we walked in the main room was buzzing with a sea of tiny super-heroes and their accompanying adults) bopping along to 90s dance classics. The awesome DJ’s 2 Bad Mice  kept the dancefloor moving with a great selection of new and old dance tunes. 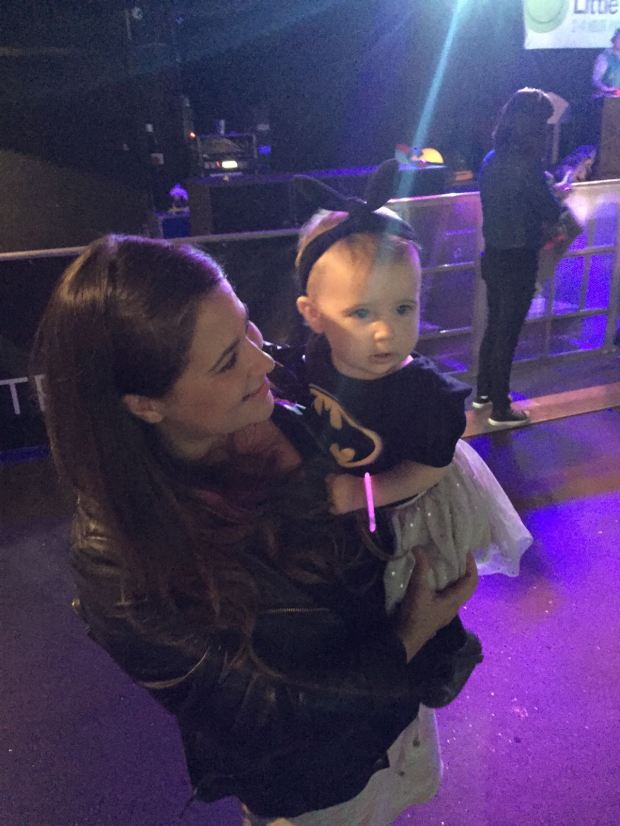 My daughter, who is almost one year old, did initially take a short while to adjust to the music, disco lights and crowds but after a few minutes she was toddling around the dancefloor, throwing some shapes. Whilst the dancefloor was really busy there was also plenty of room for her to move around pretty carefree.

In the main room, there were loads of family-friendly activities for the under 7s (and their accompanying adults). Face painting, bubbles, glitter,  fancy dress photo booth, sweet treats and a fully licensed bar. Yes, the bar was open- Happy Days!

The upstairs hallway was packed to the brim with a small army of mini crime fighters and their nemesis diving into the mountain of arts and crafts materials as part of the ‘creative play’ area (read: robots, masks, foil and glitter… lots of glitter. Mister Maker eat your heart out) This area was great for older and younger kids alike.

The balcony upstairs around the stage housed the ‘baby’ area with soft play and ball pit for the younger ones. The relaxed seating around the edge of the balcony made a great space for families to chill out and enjoy the beats and there was also couple of play houses for little ones to have funplay in.

Two hours later we were all partied out and ready to head home but we will definitely be back. Raving doesn’t have to end when you have kids all thanks to Big Fish Little Fish.

For tickets and information for BFLF CYMRU’s next Cardiff event on 11th December- ‘Winter Around the World’, with DJs Rhys & Eggsy of GOLDIE LOOKING CHAIN – 11th December visit the BFLF website or follow @bflfevents on Instagram.